Instead of waking up to the sunlight showering in from the window, she woke to lips tracing her spine. Fire and ice, coffee in the morning. One thing on her mind. How soft things could be, how far gently things could push her. A skip and a hop off the face of the Grande Canyon. This notion went in and out of her mind like the parting of ships and the eyes of lovers sealed to the coast. She closed her lids, tight. I don’t want to wake up…I ain’t never going back.

But it was real as he turned her over and finally she looked him in the eyes. Whiskey in a teacup.

We’d be better as friends, she whispered into his ear the last time they had been together and hugged as if something big was about to happen. He had never said he loved her, and if he had, she might have laughed. But they both knew, despite the random insecurities that sprang to life which sang that they had been imagining everything. Not her love for him, but his for her. Sometimes it made her sad when she forsaw the possibilities of destruction. Someone always got hurt. She’s be damned if it was her. Black Heart Baby, what one of her exes use to call her. All in and all out was her moto, fighting off the sensations that were screaming at every corner. Three little words which in history had started wars, killed millions, and also created millions more. 143.

She didn’t love him. There were too many in the world who she hadn’t yet met. How the hell was she supposed to find the “One.” As if one existed in a mass of billions. She was sure that she’d find the one and that another one would be just as good and waiting for her. These are all things she had once told herself. But she liked how his lips felt at that exact moment pressed against her cheeks. A flower petal came to her mind. That of a little white orchid, like a ghost. How soft it was and how nice to touch. What would his face look like? She sank into the pillow and could feel how badly he wanted her, all in the motions on a gentle kiss. She sank further and thought about a dark concrete road curved and lined with smooth sands, how much it resembled their skins as he cupcaked her.

Soon she would be 40. That number scared her but not nearly as bad as the thought of someone unforgettable. The way he had kissed her, like a flower petal brushing against her, like a river taking her under, something she had never felt since. 1 year passed, nothing. 5 years passed, nothing. 15 years passed, still nothing. Yet she couldn’t forget how he had kissed her shoulder blade all the way to the curve in her hips and in those brief moments she wondered if he had also sent a message to her mind which made tears come to her eyes and force their way down her cheek rolling deeper and deeper into the white cotton pillow.

I love you. He loves me? I love you. I love you. And I’ll love you forever.  She told herself that she didn’t believe his bullshit, phony attachments, just as she had done with the others. The only difference with this one was that she wasn’t listening to false words but instead to his lips touched her skin and the pauses in between as he sank down to the dimples of her back. She could feel within those brief moments that he touched her, indeed he loved like madness and chaos. Like a crowd too excited, loss of all control. Words were not needed.

They had all wanted her. Their flaws had made her better, even stronger. So she spit them out like a mouth full of chewed gum.

He was different like a metal that never dulled. A sharp hook that would kill her if she tried to pull it out.

So she left it in and felt its tug every time she moved.

Now she was 64 years old and still waiting for the One. The one that would never be better than he who has kissed her so nicely and made her hear unsaid words which even today made her tired and weary, wishing for that moment when she had felt fire and ice. 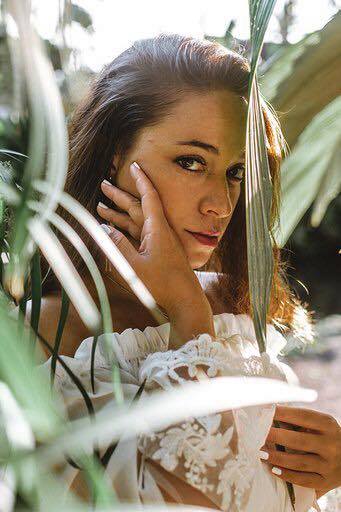