Water shattered on the glass from 10 different directions. The wind made it seem like the sky was everywhere except up. Welcome cyclone, respect our lives. Windows had to be shut and locked. On the island, no one left their homes. In 9 months a river of children would flow from women.

In the morning she woke from the sound of the rain. Last night had been harder, but the vibrations surrounding her on all sides of the little house soothed her like a lullaby. Outside the cyclone ran it’s marathon, not caring that people had made plans at the beach, not giving a damn that today was suppose to be a special day for lovers and friend, but instead, the storm ran, faster and stronger.

After she opened her eyes and stretched her body like a cat risen from a century-old nap, she thought about calling him. When would he stop being the first thing that arose in her mind like an annoying alarm clock? When would his memories be safe and sound, on the other side of the world? When the sun stopped rising.

The book by her bed was opened and instead of listening to the words the author wrote she wondered what was going through the mind of the writer as he set down each word into the typewriter. What pushed him to find his perfect words? And how could he have settle for such a muck of verbiage? She placed the book back in its corner and looked out the window. Wet, forever dripping panes. The thought of his finger running up and down her spine flashed like lighting. The skies stayed grey, her cheeks flushed in color. She wanted to get up and stand outside underneath the rain and feel each drop rail her until she stood drenched. It reminded her of how she would run outside in a storm as a child ignoring the screams of her mother. Sunshine made her forget these moments. Rain kept her in a corner to play with her shadows. Alone. She wondered how long the storm would last. Things to be done pulled at her nightgown.

She shut the crack in the window and made her morning coffee. Always in a bowl and strong, never in a cup. Just the way he had taught her. Sip and think. That was her game. Every morning she liked to believe that it made her better, a stronger thinker, smarter than the average. Maybe one day her morning thoughts would save her. A thump from above paused her thoughts of whether or not Sugar cane made Coca Cola healthier. The Mango tree no longer surprised her when an overripe fruit would sail down like a bomb in warfare on her tin roof. Now it was just a hiccup in everyday life, even when they came in the dead of night. Numbness settled back down. One more sip and she could see the bottom of the bowl where the crumbs settled from where she had dipped her Strawberry jam and buttered toast.

One day at a time. As she washed her dishes and prepared for work she thought about how much love she had felt in a lifetime. Dishes always made her sentimental. Her grandmother had always called her The Little Measurer. Grandmother had been right. She measured everything that presented itself to her, whether it was a piece of cheese at the grocery store or words written on a piece of paper meant for her eyes only.

A kiss was never meant to be measured, only enjoyed. And if it wasn’t enjoyed, there was no other thought except to stop. Yet she never stopped, instead continued measuring. The first time he had kissed her they were standing beneath a Papaya tree. She had pointed her finger up, her mouth half open with words resting on the tip of her tongue measured for his amusement only. They stayed there, he never looked up. Instead he took that first step breaking the short space which had before been used as the shield away from others. When their lips touched, her ribs tightened. When her tongue tasted him, she knew she had found something much sweeter than a fat hanging Papaya. That first kiss lasted less than 3 seconds. That first kiss also lasted for her entire life.

She took her morning shower and washed her long black blue hair which she was known for. Even though it rained outside, the air was hot and the cool water made her relax. She could have stayed under the stream for hours if she didn’t have to think about the bill which would eventually come in response. Streams ran down her body with her hair fanning over her shoulders and back. She looked at her white feet and the black rock floor which she stood on. The vision of him washing her feet entered her mind. She measured how the first kiss had been just as powerful as the last, yet nothing alike. She had wanted to kill him for what he had taken from her when he left. But what had he taken? He hadn’t cheated. He hadn’t abused her. He hadn’t said one harsh word. Somehow that only made it worse. He had only grown apart from her. Far after she had grown to be a part of him. So what had he taken? Only half of her heart. She was still waiting for her organ transplant.

Each day she tried to build what had been taken. Each day, she noticed a little more of the paradise that went on around her. The trees, the sea, the smell of foods. Soap to feel clean, perfume to feel new. She stepped out of the shower like a nude slate and noticed the rain had stopped falling.

Opening the windows and Japanese shoji doors, sunlight entered her small home and the humidity followed. She wrapped her hair in a towel and threw on a light wrap, sitting outside on the white tile balcony steps. This was her favorite place in the whole world. Close to the ground in the safety of her home. But it was the view that made her feel like she was a million miles away from Mankind.

Before her sat the wild of the South Pacific Ocean. Trees lined the beach and beyond the white sand, she could see far off waves where the reef met deep darkness. It reminded her of the first kiss they had exchanged at night with not a light on in her little home. Only the stars were out, and still, they were untouchable. They kissed. It wasn’t like a movement but more like a message from both of their souls saying that this was a dance they had been preparing for all their lives. Each movement and caress was a secret unfolded. Each sound, a noted rhythm in a symphony. This was light, regardless of the nights’ shadows. Life was being reflected. Smooth then strong, sipped like a latte.

She blinked and it started to rain again. Harder. Flowers from the Plumeria tree fell to the ground. She loved the rain. Even if it made her remember… 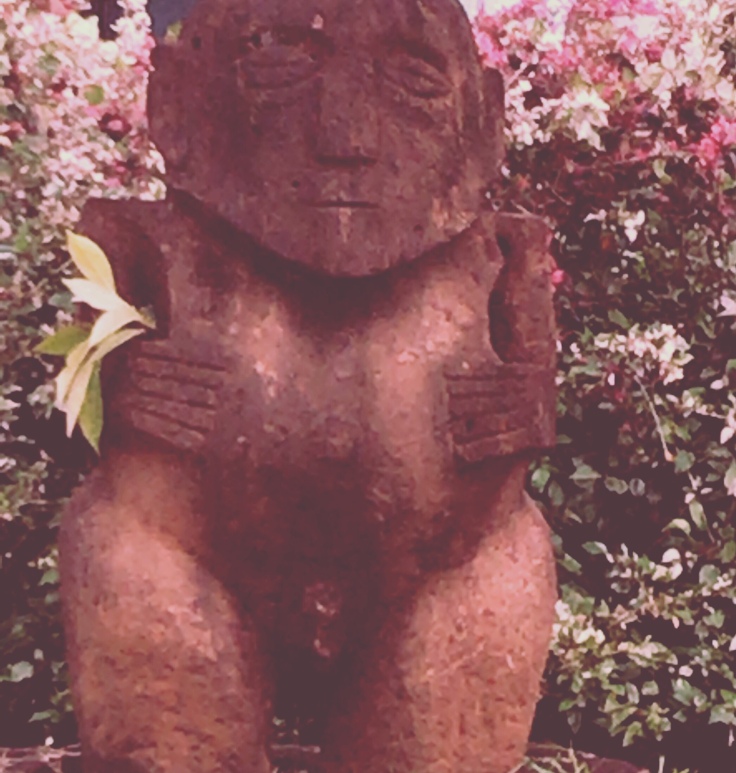